Welcome to your 'Rajasthan Delight with Udaipur By Air' tour! On arrival at the airport in Delhi, you will be met and transferred to your hotel. Note: Lunch will be served in the hotel till 2:45 pm. The afternoon is at leisure to relax. In the evening, proceed to Chokhi Dhani for a glimpse of village life followed by a traditional Rajasthani dinner. Chokhi Dhani is a popular attraction and a Rajasthani village themed resort , situated in the outskirts of Jaipur. The idea behind this landscaped area is to give a closer look of rural lifestyle by connecting Rajasthani tribes from all parts of the world and restoring the culture and tradition of Indian villages. Later, return to your hotel. 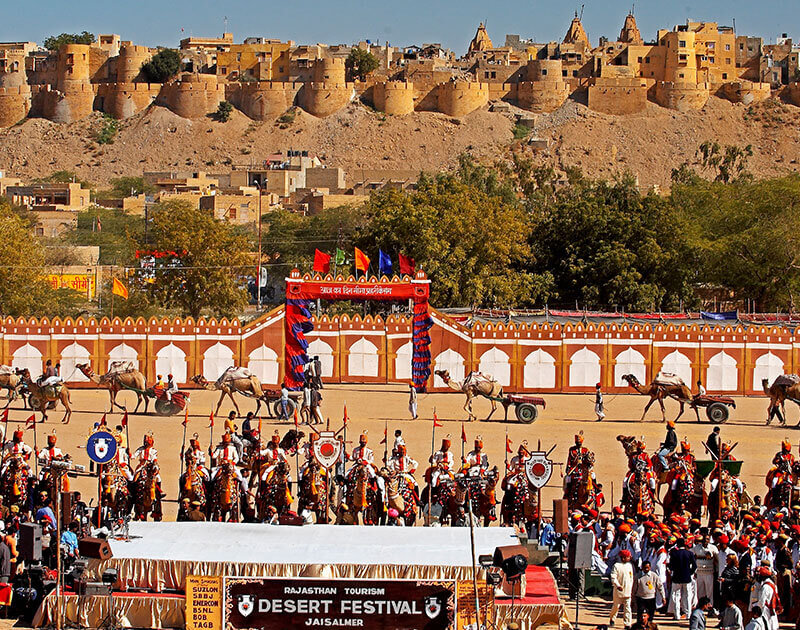 After breakfast, proceed on a sightseeing tour of Jaipur visiting places like the fabulous Amer Fort, City Palace, Jantar Mantar and Hawa Mahal. Situated on a ridge on the outskirts of the city, the fort-palace complex of Amer (also known as Amber) is surrounded by fortified battlements overlooking the Maota Lake. Known for its artistic style, it blends both Hindu and Mughal elements, as seen in its large ramparts, monuments and series of imposing gates and cobbled pathways. Highlights include the Shila Devi Temple (dedicated to goddess Kali) with its silver doors, the glass mosaics of the Mirror Palace and the filigreed maSBIe windows in the Jas Mandir. Located inside the old city, City Palace is a spectacular synthesis of Rajput and Mughal architectural styles, consisting of an overwhelming complex of exquisite palaces, gardens and courtyards. Home to the rulers of Jaipur since the first half of the 18th century, part of the palace is open to the public as the Maharaja Sawai Man Singh II Museum, which showcases an extensive collection of art, carpets, textiles and weapons, all beautifully preserved. A UNESCO World Heritage Site, Jantar Mantar (literally translates into instrument of calculation) is the largest of five astronomical observatories built by Maharaja Jai Singh in the early 18th century. The observatory consists of some 20 major geometric devices for measuring time, predicting eclipses, tracking stars in their orbits, and determining the celestial altitudes. The most impressive instrument is the massive Samrat Yantra sundial. Hawa Mahal was built in 1799 by Sawai Pratap Singh. It is a five-storeyed wonder with a spectacular pyramidal facade and overhanging windows with latticed screens, domes and spires. Originally designed for the royal ladies to watch and enjoy the processions and other activities, on the street below, it now houses a well laid out Archaeological Museum.

Today, enjoy a drive from the lush green Aravalli plains to the rugged desert city of Bikaner. En route visit Camel breeding farm, it is a government run camel station and is one of the biggest camel reproduction farm in Asia. Spread over an area of 2,000 acres of semi arid land, the centre is engaged in breeding and training of camels. On arrival, check- in to your hotel.

After breakfast, proceed on a city tour of Bikaner visiting the magnificent Junagarh Fort. Constructed in the 16th century, the formidable Junagarh Fort is a magnificent structure in maSBIe and red sandstone. In the fort complex are some palatial palaces such as Anup Mahal, Chandra Mahal (Moon Palace), Phool Mahal (Flower Palace) and Durbar Niwas (Coronation Palace), which also houses the fort museum. Later, proceed to the golden city of Rajasthan Jaisalmer, which is a home to one of the largest forts in the world. On arrival, check-in to the hotel in Jaisalmer.

After breakfast, checkout from the hotel & proceed on a sightseeing tour of Jaisalmer visiting places like Jaisalmer Fort, Patwon ki Haveli, and Gadsisar Lake. Jaisalmer Fort rises like a magnificent mirage out of the sands of the Thar Desert. Built in yellow sandstone in the 12th century by Maharawal Jaisal, and added to by his successors, this imposing citadel stands on the peak of the over 250-ft high Trikuta Hill. Popularly known as the Golden Fort or Sonar Kila, it depicts an ideal fusion of Rajput and Mughal architectural styles. The five-storeyed Patwon ki Haveli is one of the largest and most elaborate havelis in Jaisalmer. Commissioned and constructed by Guman Chand Patwa in the year 1805, it is a cluster of five havelis built separately for the five sons of Patwa and is famous for its ornate wall paintings, intricately carved latticed windows gateways and doorways. The scenic 14th century Gadsisar Lake is a rainwater conservation lake. This stately tank was once the main source of drinking water for the entire city. The beautiful archway leading to the tank was built by a royal courtesan who installed an idol of Lord Krishna to save it from demolition by the ruling king. Surrounded by ghats and temples, it is an ideal picnic spot and is famous for boating. Later, return to your Camp Later, in the evening visit to Sam sand dunes, famous for its desert safari, this is regarded as one of the prime attractions in Jaisalmer. Enjoy Camel ride and Rajasthani folk dance (subject to availability) in sand dunes camp.

Drive all the way to the city of Jodhpur - also known as the Blue City, as well as the Sun City.Upon arrival check into your hotel. Later visit the imposing Meherangarh Fort.Explore the various museums that house the finest artifacts of the Royal family of Jodhpur.Over night stay at hotel. Rest of the day at leisure.

Today leave for Udaipur - known as “City of Lakes” and “Venice of the East”. En route, you will visit the mighty Kumbhalgarh Fort, famous for having the second-longest continuous wall after the Great Wall of China and being the birthplace of the great warrior, Maharana Pratap. Hereafter, continue your journey towards Udaipur. On arrival, you will be escorted to your hotel for check-in and an overnight stay.

Proceed for a full-day tour of Udaipur. Main attractions in this tour include the City Palace, Lake Palace, Jag Mandir, Pichola Lake, Monsoon Palace, Jagdish Temple, Fateh Sagar Lake, Saheliyon-ki-Bari and many more. Afternoon will be at your leisure. Later in the evening, explore the Old City streets and dig your teeth in to delicious local cuisine. At night, head back to the hotel for dinner and night’s rest.

Check out from your hotel and be transferred to Udaipur Airport/railway station for your onward destination..